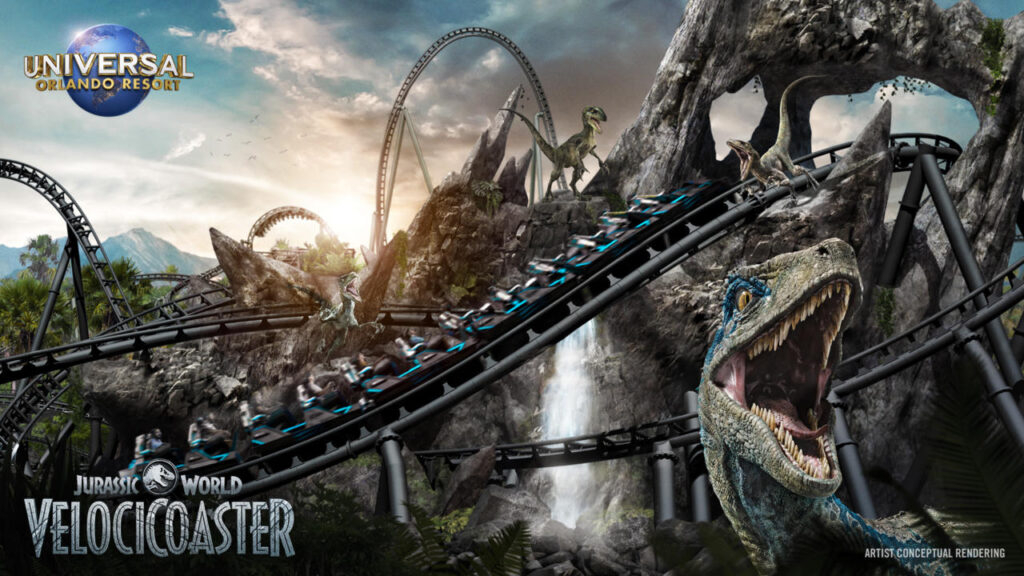 Islands of Adventure at Universal Orlando Resort will debut its new Jurassic World rollercoaster next year. Here’s your first look.

Anyone who pays attention to theme park rumors or who has actually been to Universal Studios Orlando’s Islands of Adventure this year is probably well aware of a new roller coaster being built in the park’s Jurassic World section. Now, Universal has finally revealed what the ride is and when you’ll be able to ride it.

The new attraction is called the Jurassic World VelociCoaster, continuing the parks’ streak of giving things ridiculous and entertaining names. This is, after all, the same theme park that features a Jason Bourne-themed stunt show called The Bourne Stuntacular.

Billed as Florida’s tallest and fastest launch coaster, the VelociCoaster reached speeds of 70 miles per hour in 2.4 seconds and takes riders over 150 feet in the air. It also includes a 360-degree barrel roll and two different launches. Given that it’s a Jurassic World ride, it’s also loaded with dinosaurs–and cameos from the stars of the Jurassic World films.

A press release from Universal reads, “Guests will join the original cast of the films–Chris Pratt as Owen Grady, Bryce Dallas Howard as Claire Dearing, and BD Wong as Dr. Henry Wu–as Jurassic World unveils the next evolution of its ‘carnivore expansion’: the VelociCoaster, where riders embark on a high-speed chase and feel the rush of the hunt while racing alongside a nimble Velociraptor pack.”

In addition to being the tallest and fastest launch coaster in Florida, the VelicoCoaster also includes an 80-degree drop, the steepest drop in the park, and a zero-gravity inverted stall. You can take a look at the video below to get some idea of what that will be like. Spoilers: It looks intense. So if you thought the park’s newest Harry Potter roller coaster was too much, you’re in for a surprise.

So when can you ride it? While a specific date had not been named, the Jurassic World Velocicoaster is set to open in the summer of 2021 at UniversalOrlando Resort’s Islands of Adventure. Currently, Universal is operating a modified version of its traditional Halloween Horror Nights–under the name Halloween Seasonal Experience.